The basics: The fickleness of the mountain pride butterfly to prefer feeding on orange flowers in one area and red ones in another has caused the cluster disa to become something of an adaptable chameleon – all in an effort to fool the iconic fynbos butterfly into visiting it. 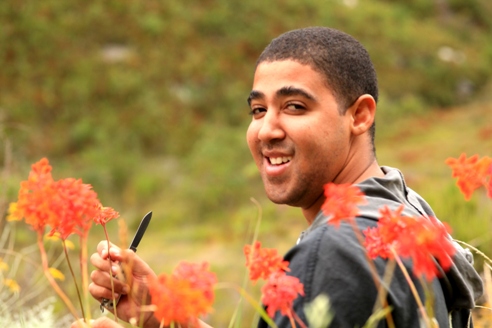 Mountain pride butterflies (Aeropetes tulbaghia) in the Cape Peninsula, to the west of their range, have a definite preference for feeding on the nectar of red flowers, but prefer finding food from orange flowers when in the eastern parts of the Western Cape. The mountain pride butterfly is the only insect that pollinates the cluster disa (Disa ferruginea).

Researchers from Stellenbosch University and the University of KwaZulu-Natal now found that cluster disas (Disa ferruginea) have adapted smartly to the butterfly’s regional colour preference by developing two colour variations (or phenotypes). A red version of the cluster disa grows in the west, and an orange variety is found towards the east.

An article on the findings by the animal-plant interaction researchers was published in the leading scientific journal Proceedings of the Royal Society B.

“Because the mountain pride butterfly has such localised, specific colour preferences, the cluster disa literally had to adapt to its pollinator and has changed its colours to survive,” says lead author Mr Ethan Newman, who did the research as part of his BSc Hons (Botany) project at Stellenbosch University (SU).

His co-authors are his supervisor, Dr Bruce Anderson of the SU Department of Botany and Zoology, and Prof Steve Johnson of the School of Life Sciences at the University of KwaZulu-Natal (UKZN).

Based on previous research done by Dr Johnson in 1994, the botanists knew that the cluster disa is only pollinated by the mountain pride butterfly. They also knew that its flowers do not produce any nutritional pollen or nectar that typically could lure potential pollinators like insects or birds. As a survival mechanism, the cluster disa opted to be a master of mimicry. It evolved to look very similar to nectar-producing flowering plants that grow in the same area. In doing so, it fools the butterfly into visiting it, inserting its long proboscis into the narrow flowers and ultimately pollinating it. This is known as floral Batesian mimicry. To the west, the cluster disa mimics the red-flowering iris Tritoniopsis triticea, and to the east, it looks very much like the orange-flowered red-hot poker (Kniphofia uvaria). These plant species make up a major part of a mountain pride butterfly’s nectar diet in each of these regions.

Mr Newman used Table Mountain as his western research site, and had to hike up the Langeberg Mountains in the Grootvadersbosch Nature Reserve near Swellendam, which was his study site to the east. He also extensively used herbarium records to further broaden his study.

His findings were based on spectrophotometry (to test the reflectance colour spectra of the flowers) and keen observation. At each study site he patiently watched for days how the butterflies responded to orange or red flowers, paper samples, flower cuttings and artificial flowers.

“There’s no doubt about it – mountain pride butterflies to the west prefer red flowers, and those found to the east are much more attracted to orange flowers,” he says.

“Because the cluster disa has responded admirably to the local colour preferences of its only pollinator, we now find two colour variations in nature,” says Mr Newman.

“Science should clearly not underestimate the fact that pollinators in different geographic regions might have capricious preferences,” concludes Dr Anderson, who is a member of the Animal-Plant Interaction Research Group at Stellenbosch University. “This could subsequently have an influence on the evolution of varying floral traits, such as flower form, colour and size.” 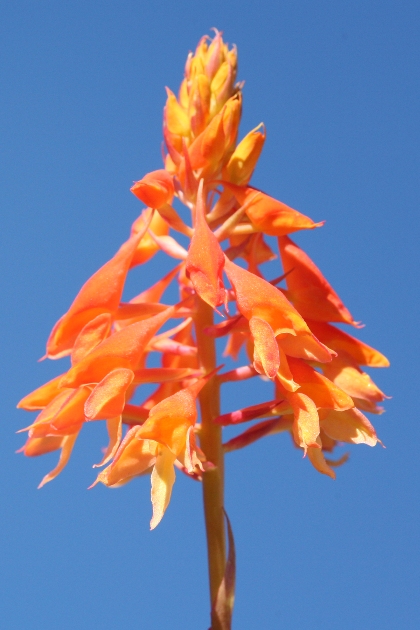 For media enquiries only: