How bees and fungi made orchids

How bees and fungi made orchids

Dr Anton Pauw of Stellenbosch University’s Department of Botany and Zoology (South Africa) collaborated on a 10 year study on SA orchid species that shows how mutualism (that “one hand washes the other” principle in nature) has helped to create the 22 000 species diversity found in orchids.

South African orchids and bees have helped a group of international scientists to shed light on the question of how one ancestral orchid species managed to spawn the 22 500 kinds of orchids that exist today.

The multinational research team worked for the past ten years in amongst others the Drakensberg mountains and fynbos regions such as the Kogelberg area, the Hex River valley and the Cederberg. The team, of which Dr Anton Pauw of the Department of Botany and Zoology at Stellenbosch University was part, also included researchers from Imperial College London (UK), Kew Royal Botanic Gardens Kew (UK), the University of Washington (USA) and the University of Bayreuth (Germany)

The researchers found that nature’s so-called “one hand washes the other” principle of mutual benefit has provided much impetus to the process through which so many orchid species were created.

The way in which animals pollinate the flowers of almost all plants in return for food such as nectar, and how fungi supply minerals to plants roots in return for sugars, are amongst the best examples of mutualism.

According to the study in American Naturalist focussing on oil-secreting orchids in South Africa, these examples of mutualism above and below the ground have had contrasting effects on plant diversity. 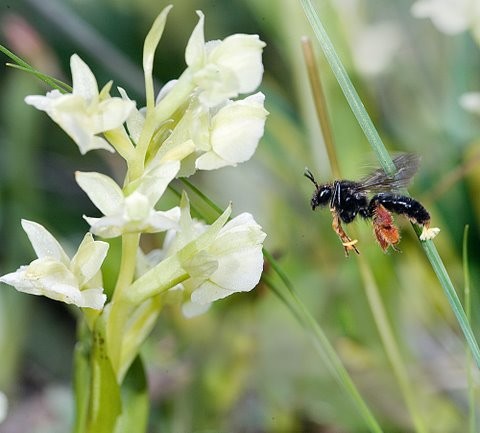 The researchers showed that the variety of ways of interacting with pollinators aboveground is what generates the diversity of plants in the first place, whereas soil fungi allow the diversity of orchids to thrive harmoniously together in the same area.

The 52 orchid species in the American Naturalist study belong to a group called the Coryciinae that all secrete oil inside their flowers. Female Rediviva bees  collect the oil to feed to their larvae.

“What is remarkable in these orchids is that diversity is generated not only through switches between pollinators, but also by switches between different body parts of the same pollinator,” says Dr Anton Pauw from the Department of Botany and Zoology at Stellenbosch University in South Africa. “For example, two closely related orchids may place pollen on different segments of the front leg of the same bee.”

This means that one bee can carry pollen from two distinct species without mixing it.

Dr Pauw says that mutualistic interactions have created a diversity of lifestyles: “By tapping into different kinds of fungi, different plant species access different pools of nutrients and so the problem of living together without competing for the same resources is solved.”

Most of the relationships between the oil-collecting bees and orchids are new to science. Their discovery required tremendous endurance from the researchers involved, as both the orchids and bees are rare and only emerge after a fire sweeps through their remote mountain habitat.

The belowground mutualisms are even less well known, as almost all of the fungi belong to unnamed species that could only be distinguished using DNA barcoding.

“We need a better understanding of these relationships if we are to predict and counter the effects of the worldwide decline in pollinators and soil quality,” says Dr Richard Waterman who participated in the research as part of his PhD studies at Imperial College.